It was a long wait.

For us, the viewers of course for the beginning of an end to one of the most iconic shows. But also for a bunch of characters to finally meet their loved ones.

And that’s actually all you got in the season premiere – characters greeting and meeting each other. Some meets were adorable, some weren’t.

The meets are of course happening because all forces must now team up to defeat the ultimate villain who’s out there to destroy the universe. Have we heard a similar plot somewhere else?

Before the action kicks in from the next episode, let us break-down how exactly do our team stand up against the mighty Winter army.

Leading this battle, it’s our favourite aunt-nephew pairing. Now that Jon can also ride a dragon, much of the heavy duty work would be laid by these two. Hopefully, Jon’s realization of his ancestry won’t cause much of a problem between the two.

Dany already had the Unsullied and Dothrakis by her side marching all the way from Essos. And Jon has the company of wildlings, Brotherhood without the Banners. Who, although don’t really match up in terms of strength but considering they have actually fought with the wlidlings, have an edge over other troops.

Entire North has also rose up to the cause. In addition to this, Jon has called up his brothers from the Night’s Watch to join forces, and Sansa had also managed to bring in Vale during Battle of Bastards.

Even with so much strength, will they still be outnumbered by the Army of Dead?

According to this article ( https://www.metro.us/entertainment/tv/how-many-white-walkers-are-there-in-game-of-thrones), here’s how large each of these troops is –

Dothrakis – 80,000
Unsullied – 8,000
North + Wildlings – 26,500
That brings to a total of around 114,000+ fighters. In the final episode of season 7 when Jaime asks how many such wights are out there, Dany said “100 thousand at least”.
Sure, the defending army is slightly outnumbered based on those figures, but given that literally anyone dead is an addition to their forces, it’s still a tough fight.

If Cersei would have actually followed the truce and sent her 60,000 Lannister Men, Iron Fleet’s 30,000 men and the finest of 20,000 men from the Golden Company, the war could have been easily done with.

It’s not just powers that’s needed to wipe off Night King and Co., we need some superpowers as well. The wheelchair-bound Bran is our best hope. We are still not sure what Bran can and can’t do. Can he warp the seven hells out of wights and bring them against White Walkers? Or he’s still a noob and Night King will easily overpower him? We’ll need to find out. For now, he’s acting as a news anchor to update people about their whereabouts.

Next, we have no one. By that, I mean Arya Stark. It’s difficult to figure out how exactly will she use her face masking techniques in front of the enemies. I guess she will have a bigger role to play in bringing down Cersei than in the Great War.

And then we have Mellisandre, whose whereabouts aren’t exactly known. But given her strong magical powers, she’ll be of great aid to everyone if she joins. 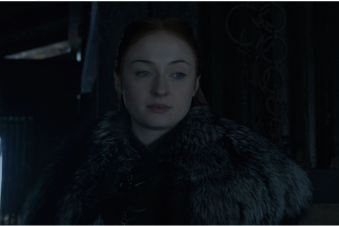 To look over the requirements of the hundreds of thousands of soldiers, we have with us a team of Support Staff led by Sansa. She’s already bit apprehensive about meeting the food requirements of such a large army base Daenerys has brought with herself, which has resulted into a cold war between the two. And not to forget, there are 2 full grown dragons around as well. Situation seems grim but she along with Tyrion and Varys will figure something out.

There’s Samwell Tarly posing as an unoffical Maester who will tend to the medical needs. There are whole lot of swordsmiths – Gendry being one of them – who are wielding weapons out of Dragonstone. Fun fact : Wights and Walkers being vulnerable to Dragonstone is an addition by the series and the novels never implied that. In the novels, it’s still just fire that could put an end to them. But for the sake of  a better visual experience, Dragonstone has come in to the picture.

So, there you have it. The heroes fighting it out in this Great War. The team is more formidable than you think. That doesn’t mean there won’t be any casualties or sacrifices. You cannot expect this story to do without them.

For now, all we can do is wish our luck for the Avengers and hope they bring an end to the Winter soon!

Of course, we are talking about the medieval Avengers. There are still some more nights to pass for our present generation Avengers to fight their (Infinity) war.