When I left the multiplex after watching Marvel’s latest and possibly most daring addition to their MCU lineup : Black Panther, I couldn’t help but get a sense of deja vu with its story. It’s a standard one, sure, and there is little novelty to it. But it felt way more similar than it should

That’s because I live in India, where a storm called Baahubali has hit the nation, telling a story of revenge with brotherly conflict at its core. Now where did I see the same story again?

This is not a rant on how one copied from the other, because that would be absolutely stupid to say. Both these films come from a different world and different schools of cinema. Yet, the similarities that they hold is interesting. And that is why we are here to dissect them.

Here are some of the things that I found similarities between the two. Also, possible spoiler alert. Make sure you have watched both the films (3 films, actually) before going ahead.

Both films introduce us to a land which is fictitious, but based on existing places. Wakanda represents the present-age African nation which is perceived to be a third-world country but is actually the most technologically advanced. Mahishmati is a prosperous kingdom of the medieval times.

Apart from the world, both films portray the distinctiveness of their people, their culture and their traditions, which again, closely resembles the actual tradition.

THE BROTHERS AND THE CONFLICT 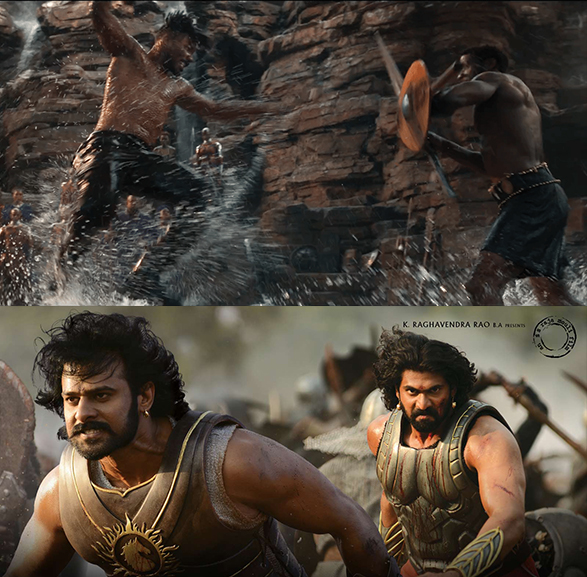 The heart of both the stories lies in the conflict of interest between the two brothers (both related through their fathers) and one’s attempt to usurp the throne from the other.While Baahubali’s Bhallaldev was pure cunning, N’Jadaka had more meaning behind his actions. As expected, the evil brother in both dies in the end, the only difference being in Baahubali it’s the brother’s son who kills and not the brother himself.

One of the characters lives in a far-off land (Killmonger in the US, Mahendra Baahubali in a distant village) and returns back to the kingdom to claim the throne after many years. Interestingly, both are abandoned by their elders. Sivagami had no choice but to leave Mahendra to random villagers. N’Jadaka is abandoned after his father’s death. Tragic coincidence.

PROTAGONISTS: RIGHT TO A TEE

T’Chala and Amarendra are like distant cousins, probably idolizing Lord Ram off the script. They are portrayed as flawless, just characters who are in complete love with their kingdom and its people.Life puts them through different tests and they come out victorious. Like in a good comic-book movie. Which, incidentally, both stories have borrowed heavily from.

The most amazing thing about both the stories are they have equally strong female characters who bring as much heft to the narrative as the males. Shuri and Devsena were major hoot, who spoke their mind fearlessly, ready to take on whoever dared to face them. Nakia and Avanthika were level headed with their lovers, standing besides them in the event of a war.

If you look outside the film, the similarity continues. With an all-black cast and crew, Black Panther was the first major production to have that. Baahubali, coming from a regional cinema, was the most expensive film ever made in the history of Indian films. Certainly, risks were huge. And, delightfully, both emerged as a raging success!

Studies and observations like these is what makes cinema and movies so interesting! Both films are awesome in its own respect, and one may prefer one over the other. This only goes on to show how the treatment can completely change a film and give you two works as different, but yet as similar, as Black Panther and Baahubali.

(P.S. My vote goes for Baahubali)