We all love cricket. But loving only cricket isn’t fair. In a nation obsessed over just one sport, the champions in others never get recognized. It is time we change that. This Olympics special column will feature unknown stories of known and unknown persons who will be representing India in this mega event. Learn from the struggle, be inspired by their stories and cheer for their win.

Shot Put involves throwing a heavy spherical object called as “shot” as far as possible. The ground rules are fairly simple, but the sport isn’t. The key to win here is putting strength at the right places. The player needs to choose any of the two putting styles – Glide and Spin, flexing the right muscles and throwing the shot with maximum velocity.

It was largely considered a men’s game, but women have joined the bandwagon too. Both perform equally well, and the records created don’t show much disparity of genders. The world-record distance for shot put in men is 23.12 m while in women it is 22.63 m.

When in a sea of Olympic selects who get neglected by the country, if you’ve been called as the “dark house” you can possibly understand the kind of popularity (or lack of it) that a person is having. Such is the state of this Olympic candidate that Wikipedia can only come up with 2 lines about her.

Manpreet Kaur like others been featured till now, hails from a small village called Sahauli in Patiala. She is married, has a daughter and works in the Railways. What sets her apart from so many women is her national record-holding shot put skills. 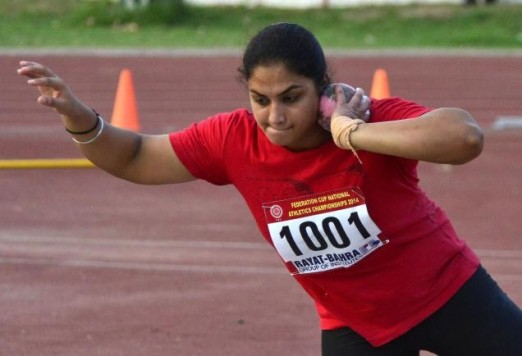 Early in her childhood days, Manpreet knew that she has more interest in sports than any of the other girls around her. She started her sports career as a sprinter but that wasn’t going anywhere. In her quest for the right sport, she somehow came across shot-put. In her career span, she has won gold thrice in succession at the National Open Athletics Championships. The Ostrava World Youth Championship in 2007 and Delhi Commonwealth games in 2010 gave her the international stage to perform. She secured 9th in both these events. But it is only in the recent national championship and Asian Games that Manpreet really shined. She not only won gold in those games, but also successively crossed the 17.8 m mark that paved her way for Rio.

Coaching her is none other than her husband, Karamjeet Singh. Being a shot-put player himself, he supported his wife in all ways possible to fulfill her passion. A strong supportive parents have always encouraged her to carve a path less taken.

So wonder what could possibly come into the way of an athlete with such a brilliant track record? The society and the system of course. In interviews, she has been stated saying that although her family supported her decisions, the villagers hardly did so. It only added to the struggles of young Manpreet who already was struggling with an even bigger problem.

We don’t get any support from Punjab Government. Despite being National champion for seven years, positive outing at the Commonwealth Games 2010 and now Olympic qualification, I haven’t received support from Government

Inspite of breaking an 18-year old national record, the Punjab Government gave no financial assistance to Manpreet. Also considering she is only other Olympic candidate from the state this year, the news is no less than shocking. Delhi-based Anglian Medal Hunt is providing her assistance for the training. She is also hoping to be included in the Target Olympic Podium scheme of the central government

Like other woman athletes, she has catched up with her passion after a hiatus during her pregnancy. She had put a brake on her dreams. But when she pedaled back, she was in an accelerating ride! Her comeback resulted in the hat-trick gold medals and the Rio selection.

The Olympics requires her to perform more, the target being at least a 20m. And given her track record till now, that may be possible with the right training. But that is exactly what she is forced to struggle for.

Olympics is a chance for our country to shine in front of the world, apart from growing those sports in the land. Why do we have to make it a disgrace? Why do we make athletes like Manpreet suffer for getting selected?

All that we can do now is at least support sportsperson like her to the fullest.